My reaction to the news was more than disappointed, it was deep hurt, disgrace and anger. What do you mean that the Memorial doors will close…… Who would allow the history and sacrifice of our female solders and sailors to fall into ruin. The answer is a long one and as I did more research after my visit I found this info listed in Wikipedia and  took this  quote from the page about the monument.

Brig. Gen. (ret.) Wilma Vaught later admitted that the memorial foundation had been naive about how difficult it would be to raise the funds needed to construct the Women in Military Service for America Memorial and endow its operation and maintenance fund.[127]

By September 1997, however, the foundation still needed $12 million to complete the memorial and endow its operating and maintenance fund.[125] That included a $2.5 million shortfall in construction funds. Foundation officials blamed a lack of interest from the defense industry, lack of access to military records (which would have enabled it to reach out to the estimated 1.2 million living women veterans), procrastination by donors, a lack of nationwide press attention, and indifference to the contributions of women for the lack of donations. Corporate support was especially lacking: Aside from the $1 million donation from AT&T and the $300,000 donation by General Motors, the next largest corporate donation was $50,000 (and only two companies gave at that level).[127][154] The inability to reach out to female veterans was a major issue. The foundation had hoped that 500,000 veterans would contribute $25 each to the memorial’s construction, but lack of outreach meant that only 200,000 had done so.[126] Vaught also blamed lack of interest from the 230,000 women currently serving in the active duty and reserve armed forces.[127] State donations were also low. Eight states (Hawaii, Idaho, Kansas, Mississippi, New Mexico, North Dakota, Utah and Wyoming) did not donate to the memorial by dedication day. Contribution levels from the states were relatively low, ranging from $60,000 from New York to just $1,750 from Colorado.[134] 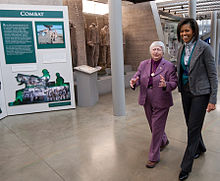 To pay the memorial’s outstanding debt, WMSAMF relied heavily on gift shop sales and other revenue. Arlington National Cemetery draws an estimated 4.5 million visitors each year.[126] Visitation numbers were not meeting expectations, however. Memorial officials said attendance would be about 250,000 to 300,000 visitors in the first year of operation, rather than the 500,000 projected. Only about 22,000 of the 375,000 people who visit Arlington National Cemetery each month visited the memorial. By July 1998, annual revenues from gift shop sales and other sources reached $5 million, about what was expected.[146] The memorial also began selling biographical data and a photograph of the individuals in the veterans’ database, which generated $14,500 in June 1998 from $2,500 in January. The memorial also began charging $4,000 for use of its space.[146]

The memorial was still unable to pay about $2 million in construction costs in January 1998.[146][147] WMSAMF had raised $19 million of the $21.5 million in total costs (construction and operation/maintenance endowment),[146] but by September 1997 could not pay Clark Construction the outstanding construction bill.[147] Clark Construction said it paid its subcontractors out-of-pocket, rather than wait for payment from the memorial foundation.[147] The firm also said it was not yet taking legal action, because it had faith in the memorial and expected to be paid.[155] Memorial president Wilma Vaught said the financial situation was not serious. Nonetheless, fund-raising experts told her said that few donors wished to give money to “women’s projects”[146] and that so many memorials were asking for funds that corporations simply stopped giving.[147] Vaught said three major donations had been received since the October 1997 dedication. These included a $500,000 donation from Eastman Kodak (payable over four years), a $250,000 donation from Merck Laboratories (payable over five years), and a $250,000 donation from a private foundation (payable immediately).[146]

Memorial finances continued to be unsteady as of 2010. The memorial had so little revenue to pay its $2.7 million annual budget that it nearly closed in 2009. Congress, however, provided a $1.6 million grant to keep it open, and a fund-raising drive brought in $250,000. [156] Although the memorial had about 241,000 women veterans listed in its database in 2010, about 75 percent of all World War II women servicemembers (who might have been counted on to donate) had already died, and many others were ill and on limited incomes. A sharp drop in gift shop sales after the September 11, 2001, terrorist attacks and the onset of the Great Recession in 2007 also significantly hurt the memorial’s finances.[157]

On October 17, 2012, the Women in Military Service for America Memorial celebrated its 15th anniversary.[1] Raising funds to cover the memorial’s $3 million for operating budget was still a struggle.[2]

In November 2016, the Women in Military Service for America Memorial said its financial situation was so poor, it may have to close.[158]

Ceremonial Gates in front of the Women in Military Service for America Memorial at Arlington National Cemetery.

The Memorial sits as the ceremonial gate way into Arlington Nation Cemetery. It is a grand building that is  not only beautiful, but peaceful and inviting. The fountain and reflecting pool were drained at this time of the year, but were still an important part of the design of the building. What a shame it is for us a people and our country to shut the doors to one of the most predominate memorials in Washington D.C.

the crowd at the dedication of the WIMSFA Memorial in Washington D.C. 1997 looking away from the front of the building

Inside the Memorial the long curving hall is home to displays and video feeds of the stories of woman who continue to be over looked by our county. As I walked the hall with my friend Retired Air Force Lt.Col. Nurse Kathryn Robinson,I find that her story is as important to this place as all the others. That she like thousands of other woman served our country, raise families and deployed to every duty they  were called to do. It was hard to see the pages and photos of the many woman who had died in combat. It was hard to think about what many of them have endured over the years of service in the harshest of the worlds conditions.

State and branch of service flags inside the Memorial.Some times displayed outside on around the base of the memorial.2016

It was hard to think of the many lives that our service nurses have fought to save over the history of the armed forces and it was harder to think about all of the lives that they have seen lost. But they continue to serve day in and day out. Our nurses, our enlisted, our officers and retired women deserve better,they deserve a places in the history of Washington D.C. They deserve the same as every male solder and sailor. They deserve a place where their stories are told and kept alive for the next generation of young women.  The same young women,who one day may want to join them, to serve and protect our great nation.

So with the future of this great memorial and the history of all of America women warriors in jeopardy, I ask that you think about how we want our women to be remembered. Think about any time that you have spent in Washington D.C. and how it will look if we allow this closing to happen. What a shame it will be on us as  a people if  did not think enough of our wives, mothers, daughters and sisters to take a stand and say that we want this place for future generations.

Please visit   Women in Military Service for America to learn more and help our women service members continue to have a place of their own.